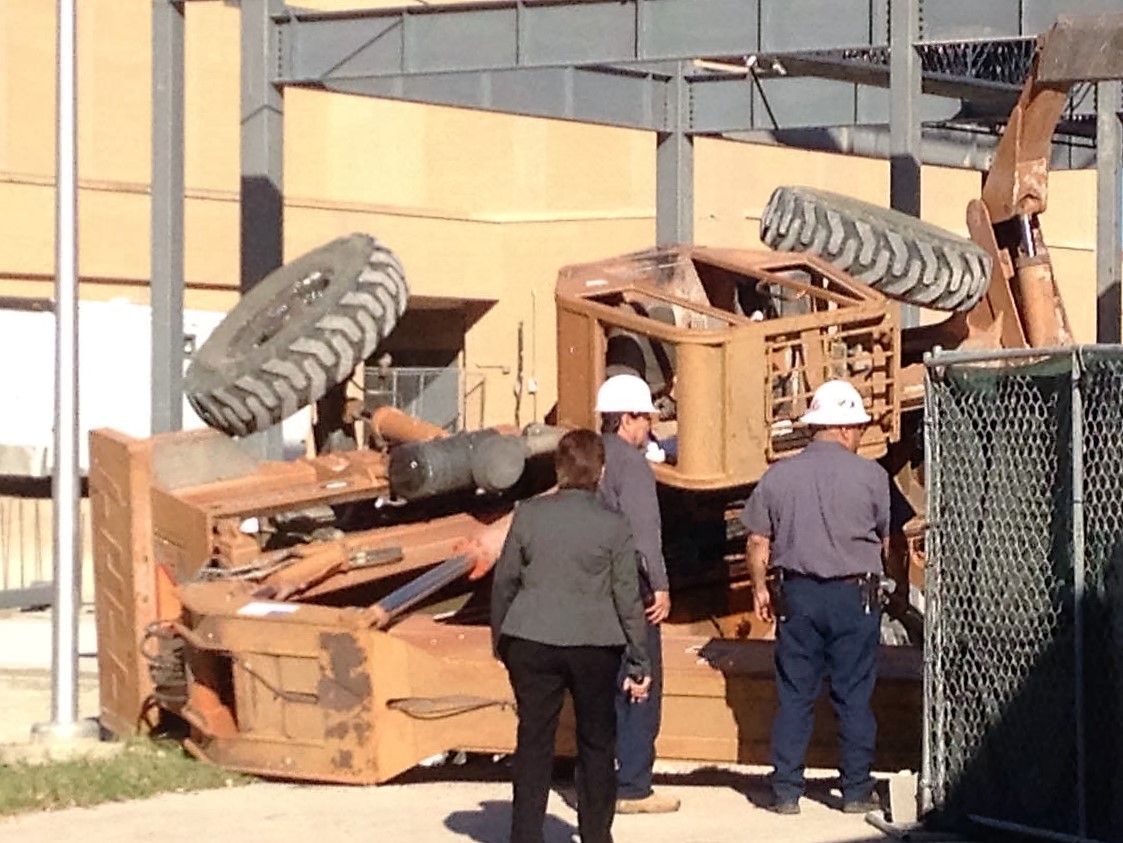 This article originally appeared in the February 2016 print edition. Story and photos by I.M. Kero At 3:45 PM on the first Monday of February, the construction site, where workers are actively building the expansion to recreation center, experienced a shocking accident. A construction vehicle known as a lull was lifting some equipment when the weight of the equipment overcompensated the lull causing it to completely fall over on its side with the operator still in it. The operator had fallen several feet from his seat straight into the ground. Witnessing the entire event was Gloria Rios, a 22 year old senior who was on her way to the Rec. center. Rios was on her phone when she witness the event. He halted in shock but quick charged towards the construction site. Standing behind the safety perimeter fence, she called towards the other construction workers engaging their colleague who was injured on the ground. She then ran around the fence into the construction site to tend the injured worker. The injured worker sustain minor injuries. He had bruising on his face alongside a bruised shoulder, possible damage to his ribs, and blunt-trauma to his arm. This was the first major accident that happened at this construction site. When asked about the situation, Rios stated that this was her first real-life encounter where she needed to administer first-aid. She cited that the education she’s been receiving were most resourceful in the event. Surprisingly, she stated that she discussed topic like the event that happened to today in her classes earlier. This was her first time provided urgent care. Her actions were key in handling the situation and could have possibly prevented any further injury to the victim. A little shocked from the whole ordeal, Gloria Rios did not realized that she was the heroic bystander to the entire event. Her action are most admirable, and shall be recognized for excellent character. When last scene, the lull was still on its side. Construction had halted and TAMIU staff continues to isolate the incident. The victim was taken away via ambulance for further treatment. Currently no statement has been made on the continued construction towards the Rec. center’s expansion. Gloria Rios continued her day at the Rec. center for her workout. Rios’ skills are a prime example of the the real-life education students in TAMIU are recieving. Though unfortunate, it is always a great learning experience when put in an actual situation. Rios can continue as the lead example towards her nursing peers. Who knows when the next TAMIU student will implement their skills in real-life?
Share
Share List