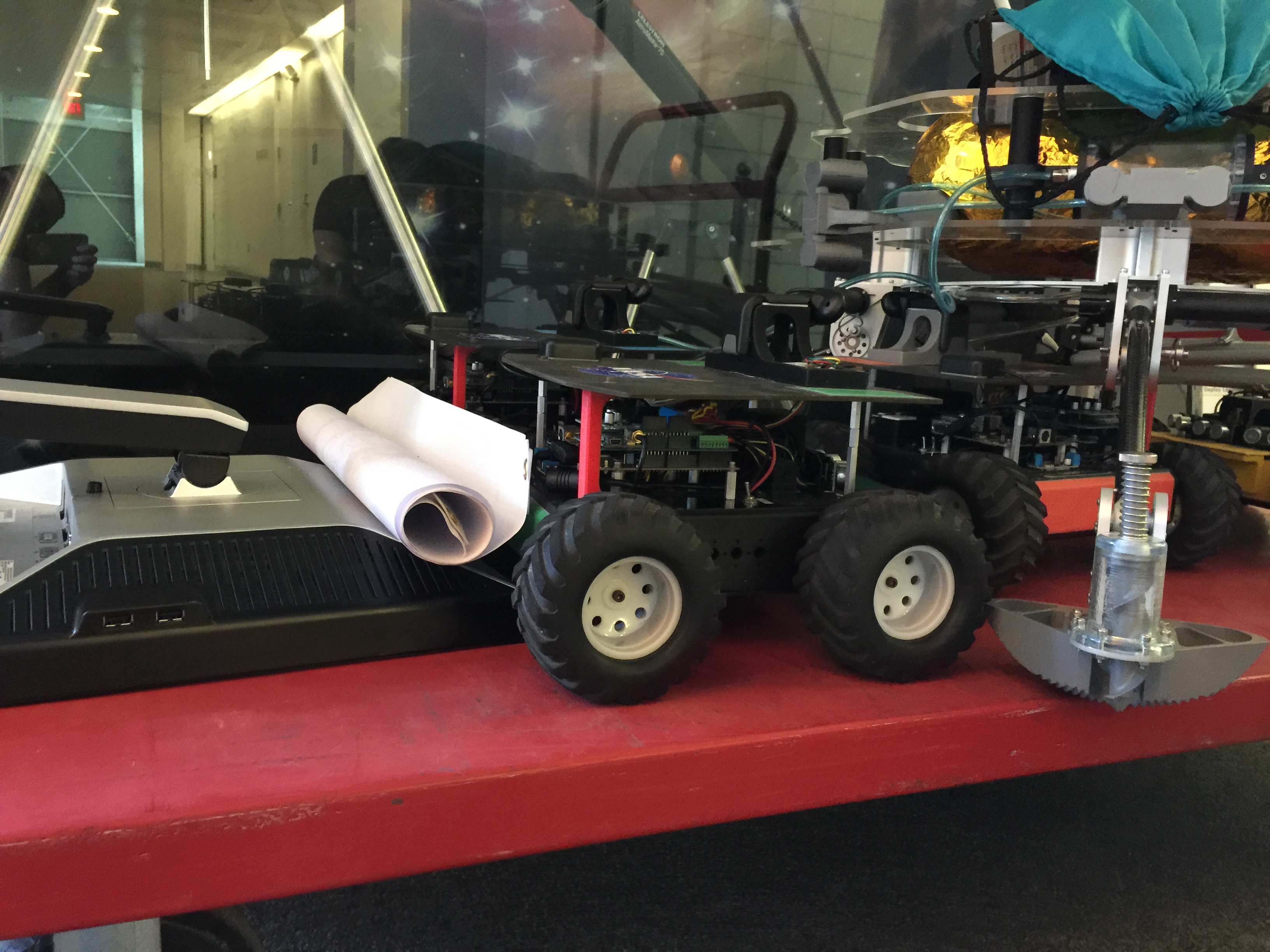 Texas A&M International University’s DustySWARM Robotics Team competed in NASA’s first Swarmathon competition, which was held at the Kennedy Space Center in Merritt Island, Florida. Dr. Tariq Tashtoush, Assistant Professor of engineering and the team’s leader, related the challenges and triumphs leading up to and during the competition. “The major challenge was to learn a new operating system because we have to use Linux. None of my students used that OS [operating system] before. They have to learn the commands because Linux is command based,” explained Tashtoush. “So you have to do everything you need with a certain sequence of commands. If you flip one or two you will not be able to execute any commands.” Tashtoush also explained on how their robots and their mechanisms worked. He compared it to the way ants leave their hill to search for food. “Once they find something they will inform all the other ants and ask them to come to that resource. The process is similar with these robots: they have cameras, Wi- fi communication and IR sensors. Whenever one of the robots sees or finds a resource that robot will send a signal to the other three robots. The message says ‘Okay, we found resources here in this area and these are the coordinates. Please come and help me carry them back to the home,’” said Tashtoush. For the virtual competition, the team was required to create a complete code and collect resources within thirty minutes. The robots also had to avoid any obstacles during the search. The camera and IR sensors were essential to this operation since they allowed the team to carefully track the robot’s every move. “The programming code we had is a combination between mathematical geometric shapes and a tracking system. The robot will be following a certain spiral and it will keep searching in a circle. Once it finds anything it will go back to the home position. Then it will move as close as possible to the previous location and resumes its search again,” said Tashtoush, who added, “All of that should be integrated in the code itself to make the robot able to perform the job by itself. We will just have to press start.” The team eventually placed third in the virtual competition, and first in the outreach paper category. By placing in the virtual competition, they are now eligible to compete in next year’s competition. Tashtoush is already looking forward and planning ahead. Unlike this year’s competition, which they prepared for in Laredo, NASA will provide the robots for them. Students will be responsible for programming them. As per competition guidelines, he must offer a mandatory class on programming for undergraduate engineering students. “It is mandatory for the students because they have to have undergraduate research on the swarmies,” explained Tashtoush. NASA Mining Competition The TAMIU Dusty Tron Robotics Team, comprised of seventeen TAMIU students participated in the competition,  along side forty-five teams from across the United States. Seventeen Rosaura Martinez, a senior systems engineering student, recalled the amount of work that went into this portion of the competition. “It was like nothing I’ve ever experienced. We would be at the KSC from 8 AM to 7 PM [at the] latest working on the robot,” said Martinez. She added that the team consisted of three sub-teams: a circuitry team, a software team, and a hardware team. Martinez, one of two girls on the DustySWARM team, elaborated on the challenges present during the competition. “From our cables burning to fixing the conveyor belt minutes before we competed, we encountered many challenges but we overcame them. Due to the challenges we encountered, we now know in what we need to improve to do better next year,” stated Martinez. Both Tashtoush and Martinez noted that their remarkable success in Florida came as a result of hard work from all members. Martinez used the structure of the team as a metaphor to describe their joint efforts. “The circuitry team can’t start working on the circuits without the hardware team having a set design. Therefore, the software team can’t start coding until there’s a set plan. Everything was connected and everyone contribute into building DustyTRON 2.0. If it wasn’t for the great cohesive team, we probably would have not placed,” said Martinez. For more information, contact Dr. Tariq H. Tashtoush, TAMIU assistant professor of Engineering, at 956.326.2600 or at tariq.tashtoush@tamiu.edu
Share
Share List