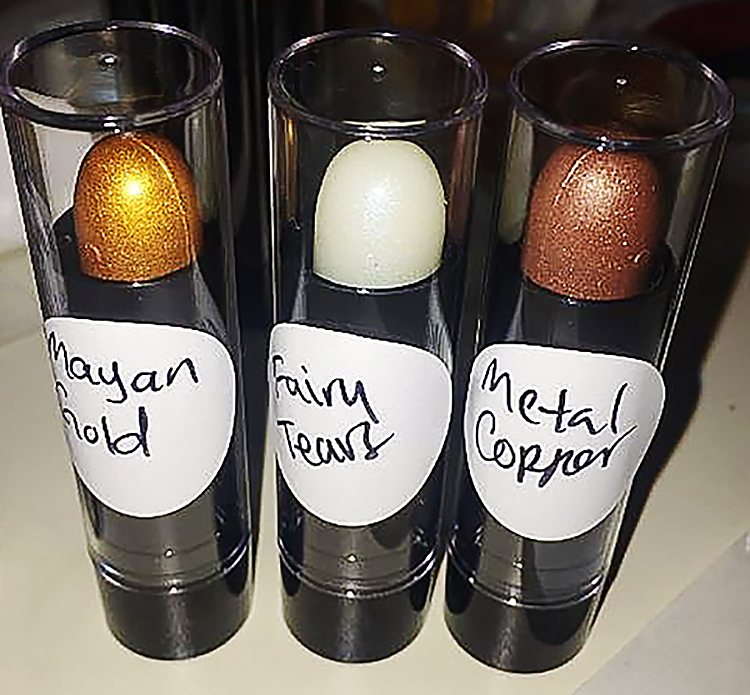 On a warm Saturday afternoon in Laredo, Ruth Castañeda sits at the desk in her dorm room surrounded by a variety of creams, extracts and powders. It is in this makeshift lab that Castañeda creates custom-made foundations, lipsticks, eye pigments, beauty oils and kajal (a type of charcoal-based eyeliner originating in South Asia) by hand. After carefully measuring, mixing and stirring a combination of the ingredients on her table, she turns around and proudly shows off the final product: homemade foundation. She then applies a small amount onto the back of her hand, demonstrating how seamlessly it blends into her skin. The foundation is just one of several products available in her makeup line, 90s Baby Cosmetics. Castañeda, a junior psychology major, explained she developed a love for cosmetics at an extremely young age. “ [I was] literally a year old,” she said. “I used to eat my mom’s cold cream and pretend to apply makeup when she did. By the time I was two, I was going through her makeup and wearing it to the point that it later became ‘mine.’” As time passed, she became more interested in creating her own looks and began testing out different styles on herself and friends. However, she was limited when it came to finding products that did not irritate her sensitive skin. This is when she began experimenting with natural ingredients to create her own products. For Castañeda, it is a labor of love and an artistic endeavor in itself, but a rewarding one nonetheless. “The satisfaction I get from making the cosmetics is that it’s therapeutic to me,” Castañeda said. “It’s a way of art form that I can actually get dirty with in terms of testing the shades and applying the actual product on others. I love seeing different splats of pigment and mica on my attire. It’s a kick I get out of being an artist.” She pointed out that depending on the client’s request, a single lipstick tube can take up to four hours to make. She explained the process of receiving and working on an order. “Once the decision has been made on the shade, tone and final look, I start to make the product myself,” Castañeda said. “The right measurements, temperature and being patient is key. The product I get the most requests on are my natural lipsticks. They are made of beeswax, jojoba oil, grape seed oil, pigments and micas as well as peppermint for the nice cool effect. All of these materials have been tested on myself and friends so [there’s] no animal testing.” She gave an example of her creative process, offering a clear view of her unique muses and knack for perfection. “The inspiration tends to come from music. I’m a ‘vibe’ kind of person,” she said. “Whatever song I tend to hear, at times I imagine the artist and try to make a shade similar to their aura. One of the lipsticks I make is called ‘Sri Lanka’ and it came from M.I.A.’s song ‘Borders.’ The marigold, reds and oranges really popped into my head. So one Friday evening I sat down until it was done. My best friend was there and she can tell you it took me four tries to get it where I wanted it to be.” However, running her own business has not been without its difficulties. On several occasions, she has experienced clients not showing up to pick up or pay for their product. “People don’t understand the work and effort that one puts to creating something like that,” Castañeda said. Similarly, getting her foot in the door and being taken seriously as an entrepreneur has also been a challenge. “Another issue is people not willing to open up to try the product,” she said. “I’ve actually had a lot of people throw shade at me and tell me that I won’t make it, and that I’m not ‘legit’ online and in person. It’s frustrating that you have to prove yourself more because you’re independent.” Despite these setbacks, she remains determined to grow her business by advertising her products online with the help of friends, often inviting them to model and sample her products. She has plenty of advice for budding entrepreneurs and makeup artists like herself. “Don’t try to be perfect,” she said. “It just constrains you. Learn to be honest with yourself and how to humble yourself. Be vulnerable with your artwork. Be original in your own aesthetics. Use your connections wisely and take risks when necessary. You have to push yourself in ways others won’t. Overall, you have to be cutthroat but also nurture those around you. It’s all about tough love and when to apply it to yourself and later on to others.” Even with 90s Baby Cosmetics still in its infancy and a full courseload this semester, she still has major plans for her brand. From creating new shades in the immediate future to finishing up her bachelor’s degree and pursuing additional education that will expand her knowledge of the industry, there is little doubt 90s Baby Cosmetics is bound to grow in the years to come. All products are available for purchase at www.etsy.com/shop/90sBabyCosmetics. Follow @90sbabycosmetics on Instagram to stay updated on new products.
Share
Share List