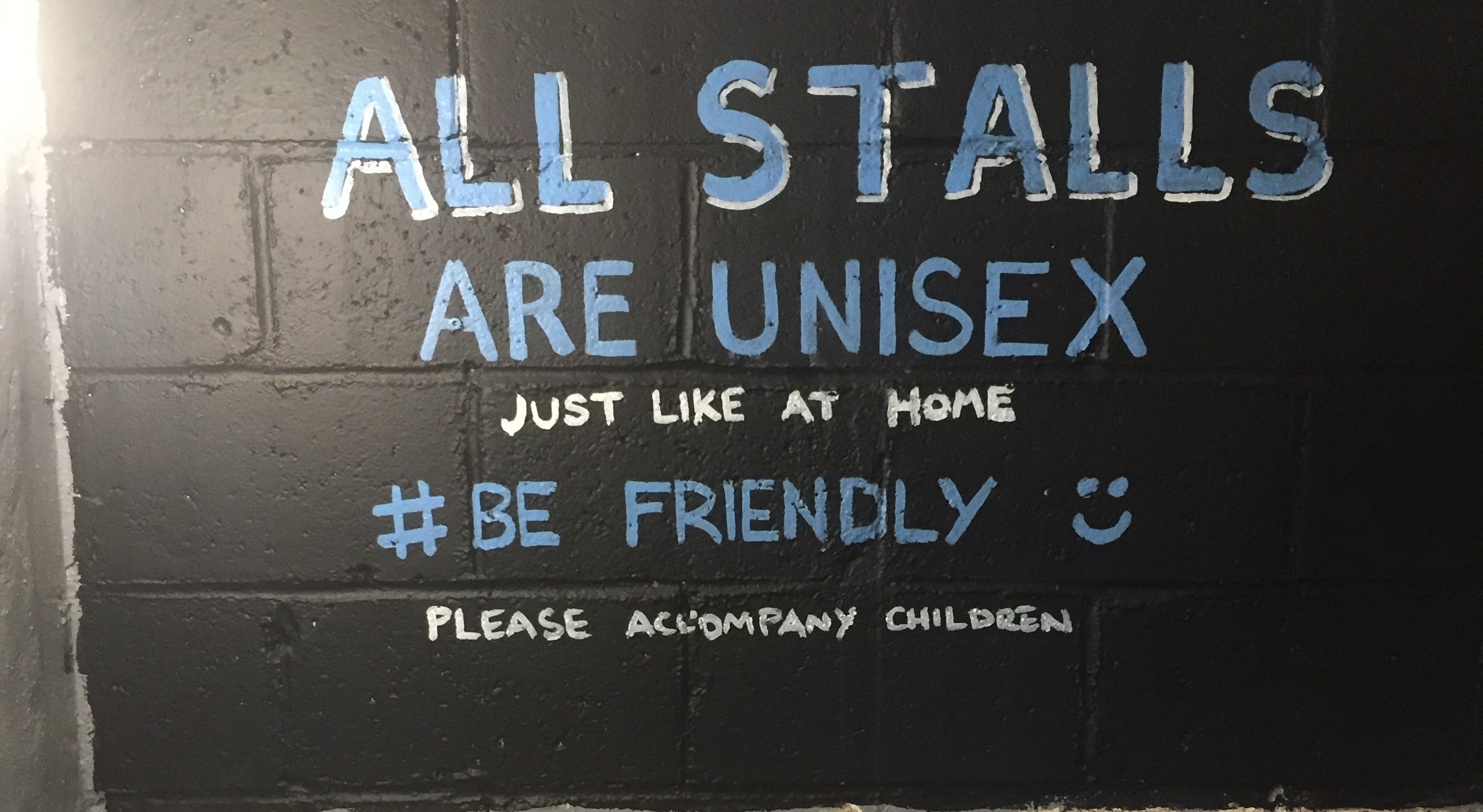 By Ediberto Garza As local citizens of Laredo, we’re raised with a mix of Mexican heritage and American beliefs, the foundations our dual culture.  Our geographical location has a strong effect on morality and values, where the machismo, or patriarchal mentality prospers throughout our community.  From an early developmental stage, we are predetermined to identify with a specific gender.  We are raised to follow specific roles, which have altered throughout the years.  However, we have slowly become more opened minded: we are free to express ourselves, choose our identity, and follow what we believe in and love.  Yet, we are still bound to some basic gender identifications. The Friendly Spot, a bar and outdoor hangout in San Antonio, implemented a unisex restroom with multiple stalls. The stalls are fully closed similar to a closet. Men and women could be using the facility at the same time. This is the only public restroom in their establishment.   At first, it felt awkward to run into a female at the sink, especially in a public restroom. But the experience reveals that there is nothing too strange about running into a person of the opposite sex in a restroom. The stalls were fully private, more so than typical public restrooms. As long as I was given my privacy while doing my business, I felt secure from any predatory threat. The Friendly Spot strongly advises that parents accompany their children in the restroom.   Having one restroom, The Friendly spot is able to save money on utility expenses, and it’s one less restroom they have to clean. For most, selecting a restroom comes natural– there is no struggle. We know where to go, when we need to go, but it’s not as simple for everyone.   Individuals undergo gender identity issue, struggle and tend to avoid restroom situations.  It is necessary to mention that the Iowa Civil Rights Act, protect and prohibit sexual orientation or gender identity discrimination. There is much debate on the subject throughout the country, but it is still a sensitive topic to discuss in our community.  Can Laredo handle unisex restrooms?   An anonymous male high school acquaintance—that now identifies as and is legally a female—contributed with her experience.  Her dignity and respect was constantly tested and degraded, from classmates and adults.  “Why can’t you be normal, Why do you act like that, what are you, and aren’t you a boy?” were some of the hateful remarks she came across daily.  Bullied and frowned upon, she used the boy’s restroom when truly necessary, yet identified as a girl. “I felt misplaced, awkward, and ashamed to be in the boy’s restroom or locker room. I used to contact my parent to pick me up, to avoid the situation,” she added. These were troubles that most of our classmates were unaware of and could not relate to. She mentioned the difficulties she uncomfortably faced, but that could be avoided, if she was given her civil right to act on.   Others argue the safety of unisex restrooms, because they unknowing allow predators to abuse the law and enter a women’s restroom for sexual purposes.  On 4, 2014, Christopher Hambrook was arrested in Toronto for sexual assault.  He used the name Jessica and claimed to be transgender to gain access to a women’s shelter. Hambrook sexually assaulted several women before being reported and given a prison sentence.  Similarly, NBC covered a story on a Virginia man peeping and filming two women and a child. By dressing as a woman he would use the women’s restroom to pray on the vulnerable. Even though we have laws to protect females from sexual assault, most locals could not understand why a genetic male has any business in a female’s restroom.  Laws have been altered to accommodate a specific community from exposure and vulnerability to harm, yet, at what cost?   Our local community may not be ready for such a change, yet there is hope for a middle ground.  No one should be denied their gender identity preference, nor feel threatened to engage in a private function.  Cooperating, respecting, and establishing a solution will lead to unity in our local community and slowly progress us toward a better future, with a less patriarchal mentality.
Share
Share List