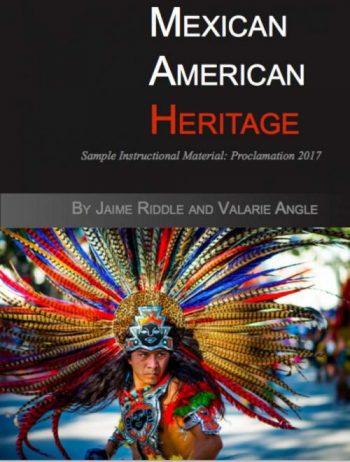 Textbooks are the biggest source of curriculum oriented information a student can get at any grade level in any educational institution. An educator can  base whole lectures, exams, and curriculum around a textbook to provide an easier and direct learning experience for their students.   This year, the Texas Education Agency (TEA) released Proclamation 2017 which lists a set of publishing companies and materials recommended for the school districts of Texas to use. This year was particularly important for one reason, as the TEA would finally release a recommended textbook focusing on Latino/Mexican-American studies in response to Chicano activists coming together demanding that Hispanic studies was added into the curriculum of Texas schools.   Unfortunately, the textbook released was not what the activists were hoping for. The following are quotes for the textbook titled Mexican American Heritage by Jamie Riddle and Valerie Angle acquired from the sample material provided by the TEA: Misguided accusations were made against Chicanos stating they “adopted a revolutionary narrative that opposed Western civilization and wanted to destroy this society. The textbook wastes no time in describing a plethora of ‘problems’ caused by immigration.   “Poverty, drugs, crime, non-assimilation, and exploitation are among some of these problems.”   In Page 248 of the textbook, they described the role of Mexican Americans in the Industrial Era.   “Industrialists were driven, competitive men who were always on the clock and concerned with efficiency. They were used to their workers putting a full day’s work quietly and obediently, and respecting rules, authority, and property. In contrast, Mexican laborers were not reared to put in a full day’s work so vigorously. There was a cultural attitude of ‘mañana,’ or ‘tomorrow,’ when it came to high-gear production.”   The Mexican American Heritage textbook seems to show one side of Hispanic culture and influence in modern American society, composed of generalizations and biased opinions. As the TEA reviews the book’s content before its release in Fall 2017, they are allowing staff, students, and community members to share their opinions on Mexican American Heritage in their online forum.   Educators, students and parents alike wasted no time in making sure the agency’s board members knew exactly the kind of impact this book would have on the students.   As the only source of information for the Mexican American Studies courses in Texas, this textbook may have the opposite effect that educators and parents alike want for their children.   A professor in Mexican American Studies at Houston Community College explained that not offering these courses to the Hispanic student population alienates them, “They see an American History, but not their unique American experience”. Students who take classes like these are less likely to drop out of school and pursue a higher level of education because they feel like what they do can directly affect the course of history.   Yet if the courses are corrupted with a biased one-sided textbook which endlessly decries the negative impacts of Mexican-Americans in the Great American Melting Pot written by authors who aren’t considered part of the Academia of Mexican American studies, the effect would be devastating to the Chicano community, which is so close to breaking through the ‘minority’ label.   This is not the first time Texas has approved textbooks with discrepancies that publishing companies thought would go unnoticed. Many scholars and professors of Mexican American studies are willing to work and create a more accurate and full narrative of the Hispanic influence in making Western Civilization what it is today, if the TEA board are willing to approach them.
Share
Share List