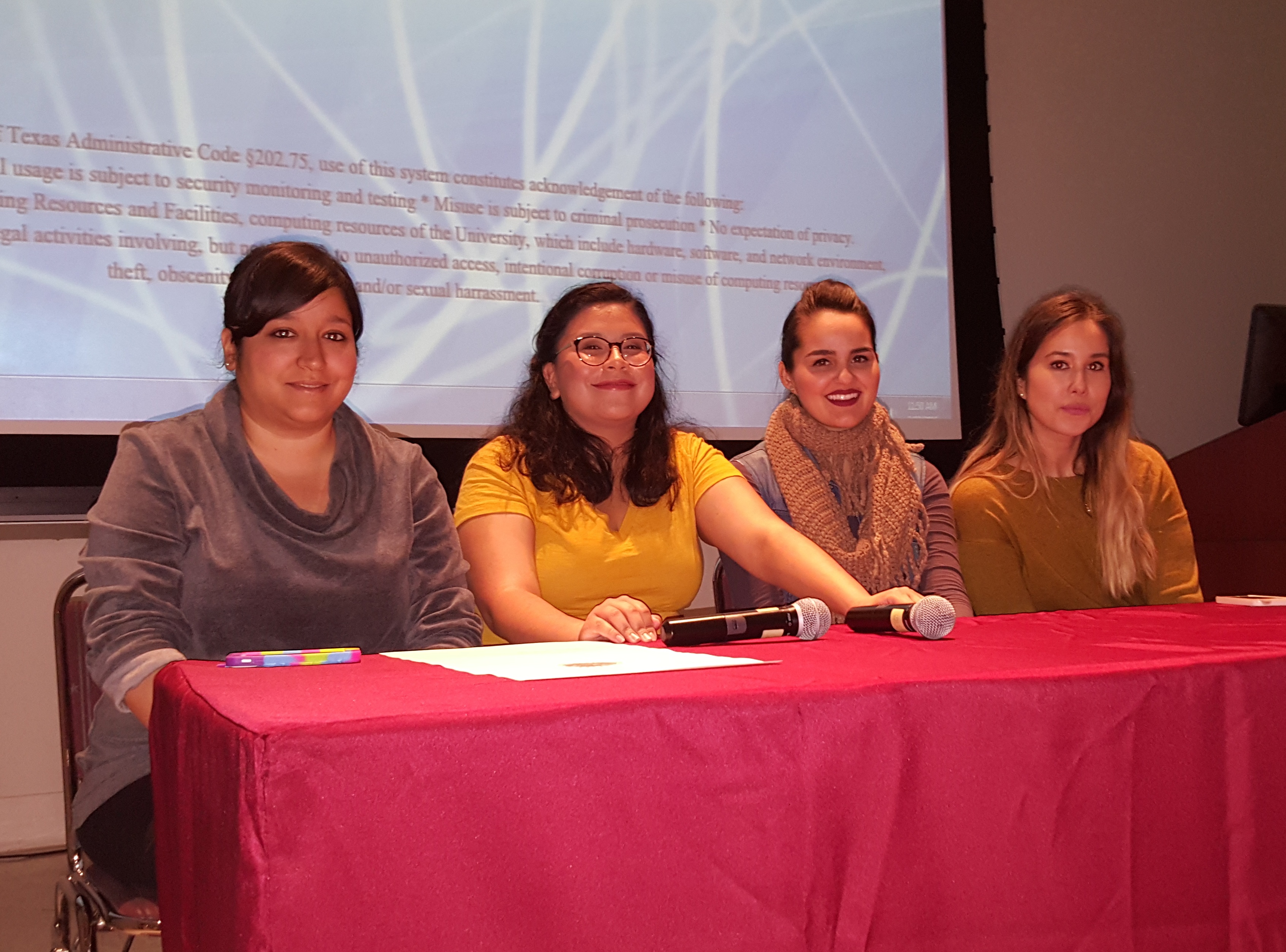 TAMIU held a series of workshops for the Laredo High School Film and Media Festival on March 22, 2016. Graduate and undergraduate students from Professor Marcela Moran’s communication and media courses presented different film topics in panel style sessions for the high school students. The first session was conducted by undergraduate students who spoke on the duties of a director behind the scenes. The group discussed pre-production and included tips to get through filming without losing friends in the process. Gerardo Lerma, a former VMT student led the session and he gave a crash course on building a narrative. Some tips for preproduction were to always use a storyboard and shot list. The students stated that they are essential for staying on time and on track. The group also expressed the importance of feeding your staff and cast as it almost guarantees that people will show up. Sound was also a big focus, as the group said that “you can edit bad visuals, but you can’t fix bad sound”. The group insisted that having a plan B for filming is necessary so you can keep rolling. The director’s role, though primarily behind the scenes, is responsible for so many of the moving parts of creating a film project. To end the undergrad session, the group presented a short film which was full of pancakes, weird goo, and lots of laughs. The attendees were able to join in on the question and answer session by asking questions on time management, and why the director decided not to be in clip. Getting feedback from experienced students should provide helpful input for future productions. The graduate students from Prof. Moran’s Ethnography and Documentary Production in the Border Region class presented a topic on documentary production. Victoria Mancha opened the panel by explaining what ethnography is and why it is important. She explained that these stories are an in-depth look into people’s lived experiences. Mancha also spoke about her experience working on her final project which is a documentary on “pulga” culture in Laredo. She expressed the fascination with flea markets in Laredo as a child, and explained the process of interacting with vendors to the audience. She stated that reassuring the vendors and patrons that the footage would be used in a student film was needed for clarity, but that letting them know their shop would be showcased also allowed for them to feel more comfortable on camera. Another student, Ana Ramirez, spoke on the importance of feedback sessions throughout the production process. She explained how without receiving critique from others, errors in editing or sound might be missed. Ramirez mentioned that having fresh eyes that having seen the project will be able to provide comments on what might need to be changed. The panel also included a short teaser for the film entitled “Mier” that is being produced by another group in Prof. Moran’s graduate class. The documentary short takes place in the city of Mier in Mexico. We learned about the city and its tragedy, but the documentary focuses on why the people in that community continue to stay and live there. The question and answer portion of this panel was very informative, as the students answered questions such as “How did you decide on your topic?”, “How do you get interviewees to feel comfortable?”, and “When and where can we watch the films when they are finished?”. The panelists were very open about the process and described many experiences and emotions that they encountered while filming. Mancha told the audience that in order to get more participants she joined the “baile” at one of the flea markets and purchased items at all the shops where she was filming. Angie Bravo, a 15 year old student from VMT stated that she had thought the idea of TAMIU students producing documentaries was “phenomenal” and that she had never heard of the city of Mier and its history, and was very eager to learn more. The day of workshops at TAMIU concluded with sessions on production logistics and character development. The following day on March 23rd, some additional workshops and the awards ceremony for the film festival were to be held at the VMT campus. The students of TAMIU provided some valuable information for possible future Dustdevils interested in the media field, and gave feedback about their experiences working on a major project. These workshops were an excellent way to encourage the sharing of knowledge with prospective students.
Share
Share List