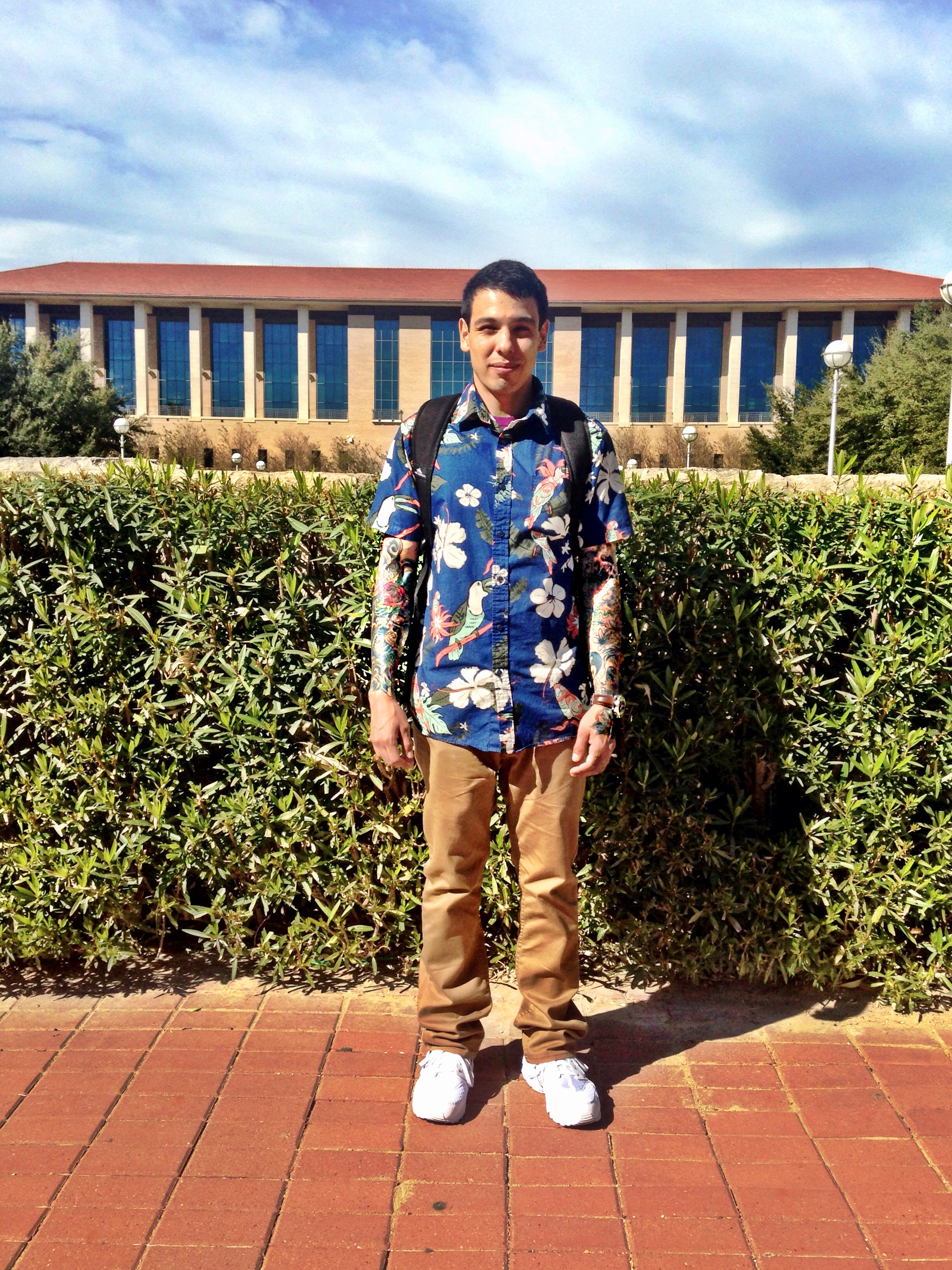 By Dominique Flores How accustomed have Americans become to basing merit on appearance? Skin color and social class are obvious prejudices that men and woman of all ages alike have experienced. More so, fundamental business classes, such as those offered at Texas A&M’s Mays Business School, teach their students the formality of business dress and business casual, emphasizing that appearance will determine whether or not a person of status will determine your worthiness of time, and, essentially, money. It appears people are stereotyping others over their external style of choice. Eloy Santa Cruz, a Psychology major at TAMIU, is nonchalantly rising above the stereotypes outsiders categorize him in. Eloy legally acquired his first tattoo –his mother’s name—on his 18th birthday at Good Time Charlie’s in Laredo, TX. “Tattoos are just another form of art [and] I want art on me,” he explains. Eloy certainly is a walking visual of monochrome black with a few colored symbols that represent the yin and yang of his life experiences. A very traditional symbol of three dots is at the center of his left arm’s sleeve. The dots represent a “crazy life” that leads to equality –e.g., the never completely black or white Chinese yin yang symbol is known to serve as an amulet to one’s dark, cold, and weak traits (yin) that cannot exist without one’s bright, hot, and strong (yang) attributes. Further emulating the characteristic symbols, Eloy’s arm has tattooed flowers to show positive thoughts a person can have, and a skull to show negative thoughts that can inadvertently influence one’s optimism. Art and meaning is definitely what Eloy has achieved through the permanent ink on his arms. Anyone would be inclined to respect Eloy and hold him to be a young man of patience and learning after spending time to see beyond presumptuous tattoo typecasts. Unfortunately, Eloy does come across negativity every now and again over the aesthetic he chooses. Members of Eloy’s own family have opinions concerning his tattooed body. Parents of the women he’s dated have also believed him to be a threat to society: “90% of the time they think I’m a gang banger, have been in jail or am about to go to jail.” He’s learned to brush off such dismissive comments. Nevertheless, he’s a good, healthy person and that’s all that matters to him. Personal inquiries revealed the women Eloy tends to be attracted to are those with bare, tattoo-less skin, ironically enough. He likes art on his skin and enjoys the natural beauty of a woman’s skin. Eloy stated he doesn’t believe tattoos are poison to one’s body, despite his ethnicity’s Catholic-regulated preference for purity. He also doesn’t think too much about how his tattoos will look on his skin when he begins to age: “veryone’s going to get old and nasty,”he mockingly asserts. Certainly Eloy’s characteristics aren’t built upon superficial ideals. He holds himself to be a charming man of worth and artful exemplification. Eloy discussed his future plans for tattooing areas like his legs, chest, and even head. He said he’ll never tattoo his neck or his face, but is excited for designing pieces to symbolize new meanings and experiences. Fortunately, Eloy mentioned he hasn’t dealt with prejudices against him during job interviews. He does have to cover up his visible tattoos, but because it is company policy as opposed to his boss’s own preference. Perhaps certain business areas in society are realizing physical looks are unique to all individuals based on their self expression. Tattoos are certain peoples armor and costume –like for Eloy. Values and skills a person is capable of should be evaluated beyond their outward appearance.
Share
Share List

3 Replies to “All That Glitters Is Not Gold”