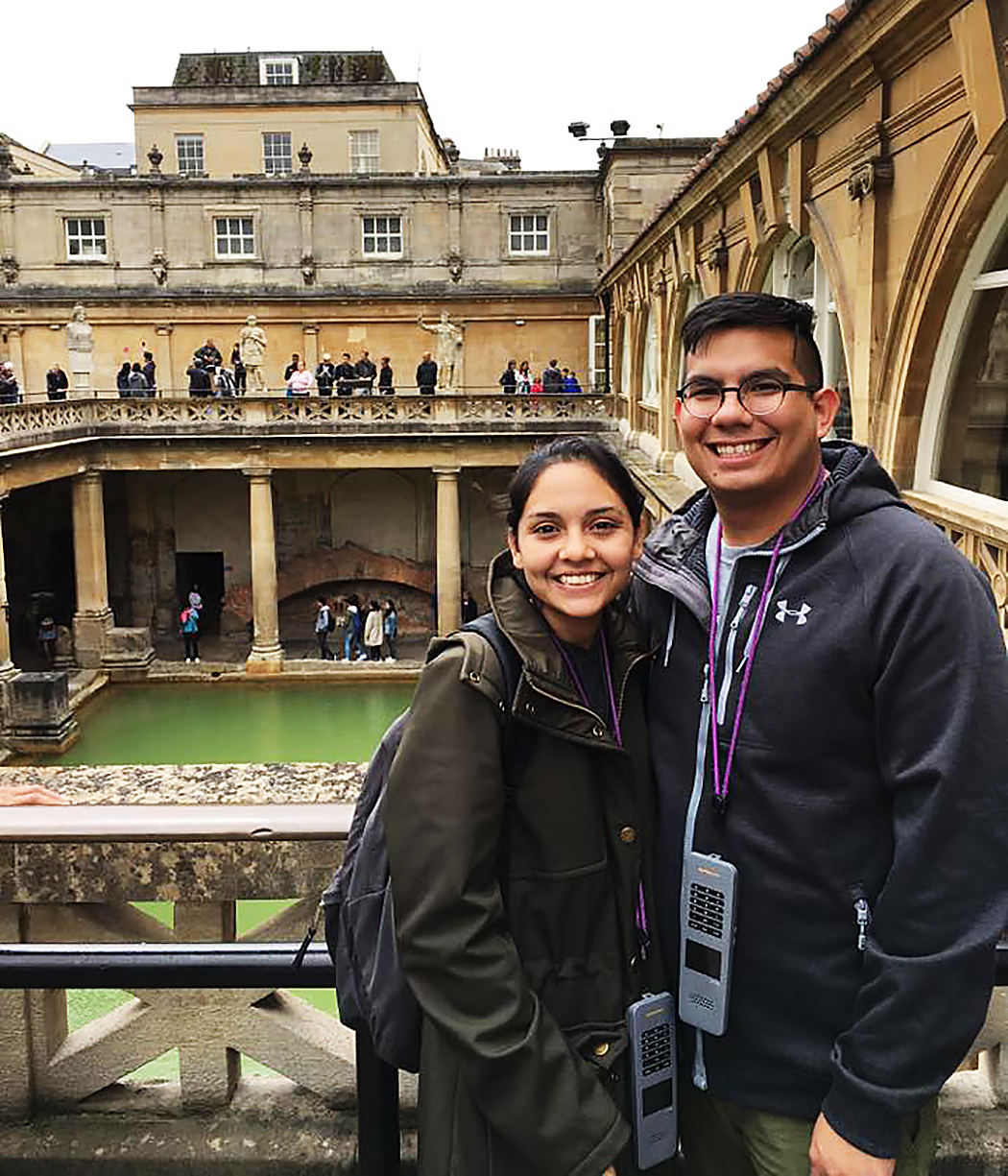 Over the summer, TAMIU students continued to study and represent the university in various locations across the globe. Two of these students, Benito Bondoc and Jessica Verastigui, had the opportunity to study abroad in London, England, during Summer Session I.

Bondoc and Verastigui were enrolled in the course ENGL 4325: Shakespeare’s Plays in Pop Culture taught by Ursula Klein. This course gave students the opportunity to expand their knowledge and appreciation of the famous playwright and his work outside of a traditional classroom. Included in the itinerary were outings to historic landmarks, including the Globe Theatre, where many of Shakespeare’s most renowned works were (and still are) performed.

Both students shared their reasons for choosing this program.

“The course was covering some of Shakespeare’s most famous plays in modern time. As a theatre minor I thought it would be an exciting course to take,” Verastigui said. The trip marked her second visit to London. She previously traveled to the United Kingdom in 2013 with the J.W. Nixon High School Thespian Society; unfortunately, she was only able to visit the city for two days before leaving for Edinburgh, Scotland, for the remainder of her trip.

“London is a hub for theater,” he said. “I found myself unable to pass up this opportunity. This was also my first time studying abroad and I was excited to analyze Shakespeare and the restoration period in their places of origin.”

Determined to visit the mecca of their studies, they spent the months leading up to their departure fundraising and working to make the trip possible.

“The biggest hurdle I faced before the trip was the financial expenses,” Verastigui said. “Not only did I have to figure out how to pay for the study abroad trip, but also for the tuition and fees, airfare, and food.”

Financial concerns are a common struggle for students studying abroad.

“One hurdle was making sure I was well equipped to make the trip, including financially,” Bondoc said. “There is a lot of planning that goes into staying in another country for a month so organizing and reorganizing became a common process. I would say, overall, my biggest hurdle was convincing myself it was all possible.”

Both agreed the stress associated with planning their trip was well worth it, given the once-in-a-lifetime experiences they shared.

“Being able to see a modernized version of Shakespeare’s ‘Twelfth Night’ in the Globe Theatre was phenomenal,” Bondoc said. “The experience, the theater, the groundlings and the play were all ingredients to an unforgettable experience.”

Other experiences included seeing and meeting John Boyega (Finn, “Star Wars Episode VII: The Force Awakens”) after his performance in “Woyzeck” at the Old Vic Theatre.

Now back home and at TAMIU, they strongly encourage other students to consider studying abroad, while also remembering what it takes to make these goals a reality.

“Plan ahead for optimal enjoyment,” he said. “Plan for everything you will do on the daily, for big events you want to experience and everything in between. Try not to come back wishing you had made time for certain things.”