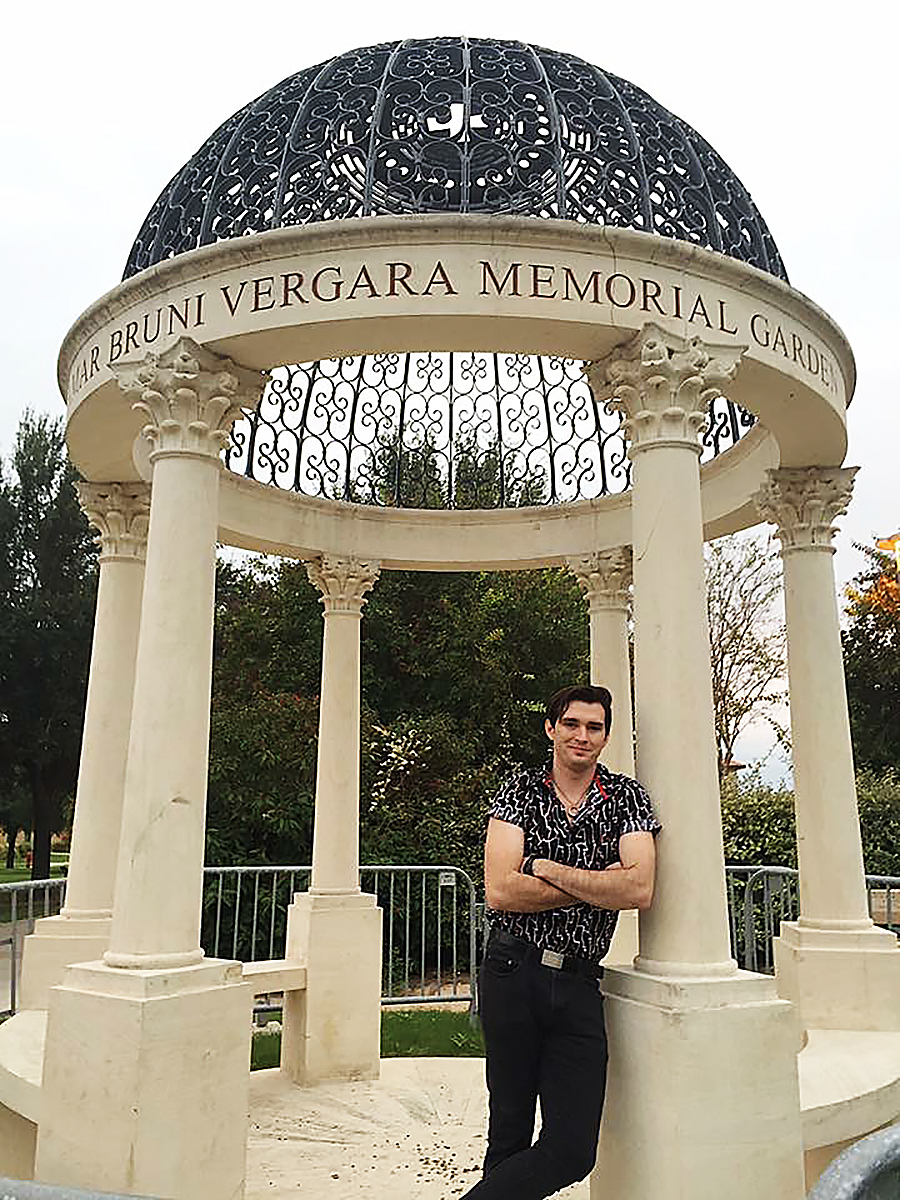 Speeches, poems and musical tributes, by those who knew him, honored the memory of Robert “Bob” Batey during a recent service. Friends, family and colleagues gathered Sept. 8 in the Fine and Performing Arts Center Recital Hall to reflect on the life of the former student and employee of Texas A&M International University. Batey, 28, passed away July 8. Having discovered a love for music at an early age, Batey studied classical guitar under the tutelage of Gilberto Soto. He later ventured into acting and verbal poetry, and gradually came to be a beloved and integral part of the growing arts scene in Laredo. However, his passion was not limited to his own artistic works. After his untimely passing, local artists spoke of the unwavering support they received from Batey, whether in the form of promoting them on his social media accounts, offering advice or attending the same events he frequently promoted. Upon arriving, guests received stickers with an image of Batey playing his guitar, head thrown back in ecstasy, with the words “Galactic Frontera” at the bottom. This was a term he coined for Laredo, where Batey was a lifelong resident. Director of Theatre Facilities Adalberto Chavarria joked that the story behind the term is to remain a secret only known to Chavarria, Batey and Batey’s girlfriend, Julia Orduña. Chavarria, longtime Batey family friend, spoke to The Bridge about their close and unique relationship. “I first met Bob when he was about four to five years old,” he said. “This was at Laredo Little Theater. His mom was very active in local community theater and Bob was a part of that growing up. Since then, I’ve seen him grow up to the man he became.” He began to mentor Batey in audio engineering before taking him on as an employee. While working with him, he witnessed firsthand the young man’s incredible work ethic. “His best attribute was how he became one of, if not the best live audio technician in Laredo [and] his attention to detail and desire to try and give the best product possible with what he had at his disposal,” he said. Chavarria added that many of his favorite memories of Batey came from simply watching him interact with others. “He would go up to someone and just say positive things,” he said. “Bob had a way of making sure he left a great memory on anyone. And he did it genuinely and modestly. I also must add that after he met Julia, his life became something even more amazing. His positive spirit grew even stronger with Julia by his side.” Despite experiencing this devastating loss, Chavarria believes Batey’s legacy will live on through the countless lives he touched. “Bob always believed everyone’s soul was unique and they should shine that soul for all to see,” Chavarria said. “Bob is also the founder of Galactic Frontera. We should carry on his vision, his City of Laredo, his music.” Matt McVinnie was a close friend who worked and lived with Batey when they were students. “For me, the tribute brought some mixed emotions,” McVinnie said. “I was happy, sad, hopeful and inspired. I’ll admit this is the hardest thing I’ve ever dealt with but each time I see the people that come to these tributes, the people Bob reached, I am truly inspired and optimistic. I feel I can speak for over a dozen people when I say Bob will be remembered for his drive, passion and unwavering support for everything and anything artistic. Bob believed it was in our nature to create meaning in this chaotic world and find a voice.” Armando X. Lopez, a local attorney and member of Laredo Border Slam Poetry, expressed similar sentiments. “I didn’t realize how much I still haven’t gotten over his presence,” Lopez said. “I was touched and happy to see the people he loved.” Lopez also spoke at the memorial service. “He saw all of us in a way that we sometimes didn’t see ourselves,” he said, “and he truly, truly was a generous, talented and loving soul.” Batey’s family was also present at the memorial. His sister Karol Batey felt the location and inclusion of art were perfect for honoring her brother. “I felt happy we were able to use art to remember Bobby, especially in that recital hall where Bob recorded so many artists he felt truly special about,” she said. “He would babysit for me and a lot of the time he would be in that hall with Lucy (his niece) by his side in the [sound] booth. So I felt it was a beautiful way to remember his spirit.” Lastly, she urged others to continue her brother’s legacy of love and compassion. “I want Bobby to be remembered for what he left on this earth…mainly his love he left behind for all of us,” Batey said. “Bobby loved fiercely and unapologetically. It’s something all of us should strive to have every day of our lives. You never know whose life you might be able to affect by making this little change in yours.” With crowds gathering at TAMIU to celebrate his life and tributes still filling his Facebook page daily, it is clear Batey’s kind and humble nature affected Laredo in more ways than he ever realized. It is also clear that even in his absence, he is still doing just that.
Share
Share List