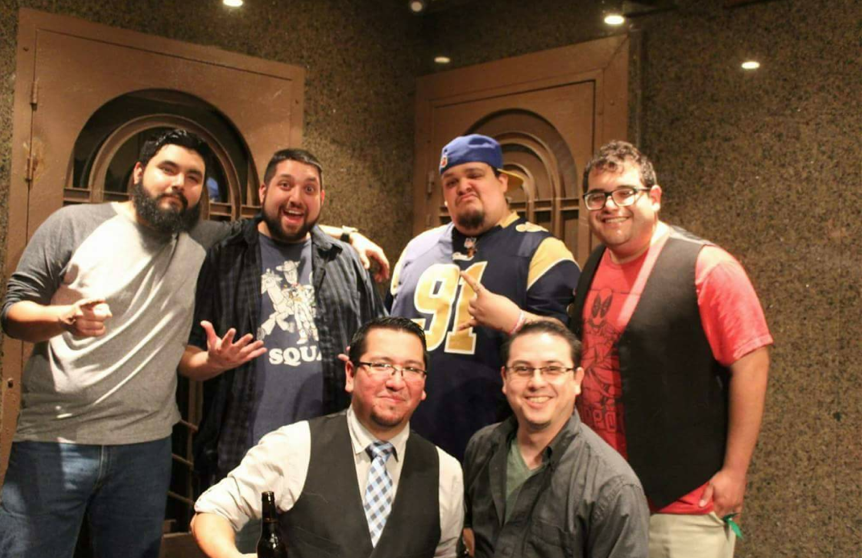 If laughter is the best medicine, then there is plenty of it to go around here in the Gateway City. Thanks to Laredo Funny, an up-and-coming comedy group, those seeking solace in the form of laughs are in luck, as this group has an endless supply to give.     Originally founded in 2016, group now includes J.R. Riojas (BA ’03, Business Administration), Steven Sosa, Fred “Big Mac” Madrigal, Emmanuel “Brian” Rodriguez, Joe Alex Garza, and Jorge Alvarez in its lineup.     Since then, the group has become a staple of local nightlife. They have also performed outside of Laredo, from the Hill Country to the Rio Grande Valley.     Their respective styles and experiences vary greatly; however, the variety of voices found in Laredo Funny is key to the group’s success. Their subjects range from Madrigal’s hilarious anecdotes about his “weight loss and weight gain” journey to Alvarez’s humorous take on relationships and parenthood.     “One of the best things about being part of this group is that you can’t compare one style of comedy to the other,” said Rodriguez.     “You’re not going to see a bunch of George Lopez clones or get a bunch of stereotypical Mexican comedy,” added Alvarez. “There’s something for everyone.”     As a TAMIU alumnus, Riojas encouraged students interested in pursuing stand-up comedy to sign up for open mics, attend local shows, and get to know other comics.     “The next great comic is out there, and we just need him to step through the door,” said Alvarez.     “Or her,” Garza chimed in.     Once again, the group stressed their support for aspiring comics.     “Failure is never fatal and success is never solo,” said Garza. “The cool thing about being with these guys is that whether you’re winning or losing, you’re never lonely. When you succeed, they’re happy for you and when they succeed, you’re happy for them. You celebrate each other’s successes.”     On a more serious note, Alvarez added that the art of stand-up is just as cathartic for them as it is for the audience.     He shared how during a particularly rough night, an audience member approached him and explained she had recently fallen on hard times, but that his set had allowed her to laugh and briefly forget her troubles.     For Alvarez, this exchange reaffirmed his love for what he does.     “I had that light bulb turn [on in my head] and thought ‘That’s why I’m doing this. That’s why we do what we do.'”     He added, “Comedians are the island of misfit toys. We’re a bunch of broken people that find humor in stuff, and we can go on stage and make people laugh about it.”     Their collective optimistic spirit was all the more evident when asked about the future of Laredo Funny. Among their plans are a tour of the Northeast this summer and a benefit show for veterans during the Memorial Day weekend. Three members (Rodriguez, Alvarez, and Riojas) are military veterans and will be featured alongside other veterans from South Texas.     But for these comics, home is the best place to find and share laughs.     “It’s been a great ride so far, but we’re barely getting the movement rolling here in Laredo and I think it’s just gonna keep on expanding,” said Rodriguez.     To stay informed on their upcoming shows, follow Laredo Funny at facebook.com/laredofunny.
Share
Share List