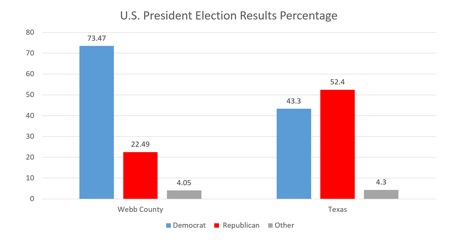 By Danny Zaragoza Texas has a reputation of being a red state because it traditionally votes Republican in most elections. However, the state’s southern border with Mexico has a blue hue to it. South Texas has a history of voting differently than the Northern part of the state. Webb County tends to be Democratic because of the prevalent Hispanic culture in the area. “We tend to incline towards the Democratic Party because of the beliefs and the vision this party has which typically inclines more towards the Hispanic population and our needs” says Albert Torres, Chair of the Webb County Democratic Party. Democrats and the Hispanic culture share a need to continuously help the disadvantaged. Traditionally Hispanic families tend to help relatives or neighbors when they cannot fend for themselves. An elderly Hispanic is not usually admitted into a nursing home, instead, he or she are brought into the home of a relative that can care for the elder with the support of the rest of the family.   “We only want to help those that cannot help themselves… If you need help to get to the point where you can take care of yourself, we’re more than willing to help. If you’re totally capable in taking care of yourself, we don’t need to be in your business,” says Randy Blair, Chair of the Webb County Republican Party. This is not to say that Republicans will rid their constituents of any governmental assistance, not at all, they instead want to encourage people to help themselves and to contribute back to the economy that has helped them in their time of need. The Republican Party’s tough views on immigration and priority of national security also contradict the Hispanic culture’s view on having an amicable relationship with our neighboring countries.   Both parties, however, agree that a primary reason Laredo continues to be a Democratic city is because of Laredo’s lower to middle class income. According the United States Census Bureau’s website, between 2010 and 2014, the average per capita income for Laredo was $15,127, the household income was $39,408, with a poverty rate of 31.2% for the city. Incomes of this level call for a need for social programs, which both parties support. Torres claims Laredoans continue to vote Democratic because they utilize government assistance and Blair claims voters adhere to the Democratic Party because they receive help from the government.   Two similar statements with two different meanings. The Democratic party asserts that social programs are a necessity to help the underprivileged, whereas, the Republican party views government assistance, as it is now, as a symbolic crutch that hinders people from bettering themselves and investing back into the U.S. economy. “You are… enslaved to those who are giving you that money, that support,” says Blair. This idea coupled with a straight ticket option on ballots makes it easier to get elected as a Democrat in Laredo.   “We will see Texas turn in to a Purple State [what is called in elections a “toss-up” state] or a Blue State [strong Democrat] before we see Webb County turn.”  Red [strong Republican],” Torres predicts.
Share
Share List