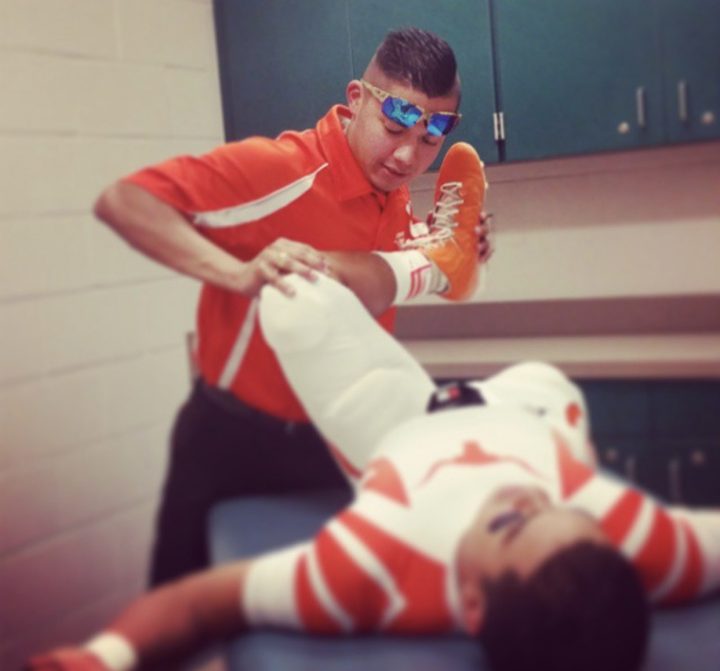 By Alexandra Camacho Many people know what a “coaching” position is but, few people know what an “athletic training” position really means. Sports is a big part of America, it is all over the television and schools and athletic trainers are the people behind the scenes that play a big role, most of the times unnoticed. An Athletic Trainer is a person who helps athletes recover when they get hurt. Carlos Moises Salinas is the Athletic Trainer at United High School, and he has been working for them for 3 years now. When he graduated from Texas State University and completed his four month internship with the Baltimore Orioles, he saw a vacancy at United and immediately submitted an application along with his résumé. The school liked what they saw and Carlos was hired and started working for United in August of 2013. He is actually an alumni of United High School which is what motivated him to work there and return to his Alma Matter.   Carlos tells us how on a typical work day he has about 15 rehabilitations “rehabs”, and treatments to do, but he also has paper work, orders and treatment logs to submit after his lunch time. The “fun” part begins after school when football practice starts because he gets to jog around the field and do “hands on” work with the players. Football practices end around 6 pm, then all there is left to do is clean up and his day is over by 7 pm.   Friday’s are very busy when there are games, his work starting before lunch time, when he starts packing the things they might need although games don’t start until 7 pm. After school, players have their pre-game meals and then Carlos goes back to the training room to start tapping the players. After this, Carlos heads to the stadium along with the other trainers and as soon as they get there, they unload his jeep with the equipment they might need. Carlos and his coworkers help the players stretch and work on any last minute accommodations before the game starts. After the final whistle, around 10:30 pm he gets to go home, unless someone got hurt, in which case he has to evaluate the injury.   Carlos decided to study and work in this field because he loves sports and he has always liked the anatomy aspect of medicine and most of all, he says “I love to help other athletes get better and go back to play”. He encourages students to study this field because you get to help others recover and return to their normal state. “Nothing brings more joy to my life than to hear the words ‘Thank you, because of YOU, I was able to finish my season’ and that is the greatest thing an athlete can tell you”.   Carlos says he definitely sees himself doing this for the rest of his life because he is doing what he likes and there is no exhaustion, although the only drawback is that he doesn’t get to spend as much time with his wife and loved ones, like he and they would like to.
Share
Share List