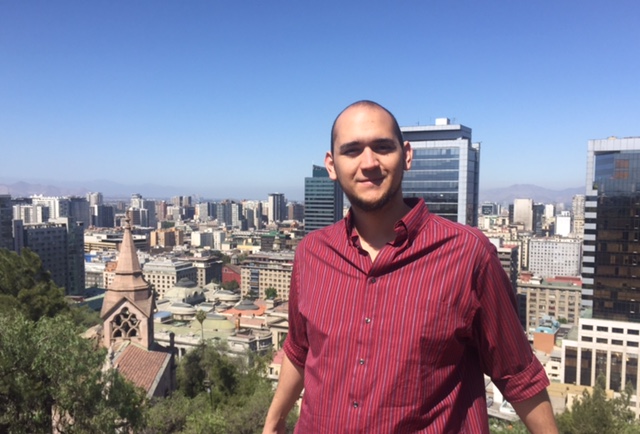 The era of being confined to your hometown is long gone— the average American will move five times in their lifetime. With the advance of technology, our world keeps getting smaller and smaller; young adults look now further than their own countries for their next home. Passports in hand, these men and women look towards foreign lands not necessarily because of survival —as is the case for refugees— but rather out of sense of adventure. Carlos Reyna, 26 was born in the Mexican border-city of Nuevo Laredo; he later went to study at the metropolitan Mexican city of Monterrey. After gaining his degree, he decided to move to Austin, TX in order to get his Master’s Degree in Computer Science; soon after he woke up to the harsh reality of unemployment. “Joblessness. During my first month in Chile, I was glad to move away from the site of what I considered, back then, to be failures,” he related, “I’ve since then moved away from this view. Lessons are learned from mistakes”, he told us. Having studied computer science, he was stubborn about working in the field but he was not the only graduate and jobs were scarce. He faced two obvious choices: look for a job in a different field or go back to Monterrey. He chose another option, one that was not part of the original choices: move to a different country. Two months later he was on a fourteen-hour flight to Chile; today, he’s telling his story. “It felt like closing another chapter in my life and beginning a new one. This was the beginning of a new adventure, and I had eyes only for the future. I had no debts or other economic or legal ties or responsibilities.”     Making Santiago, Chile his new home was not as straightforward as one would think; Chileans speak Spanish, as Mexicans do, but the two are not identical. Reyna relates on how a days did not go by without him having to ask people to clarify what they meant —and that’s without taking into account idioms and popular culture. “I had trouble processing the words that come out of their mouths. Chileans speak quickly and are wont to omit consonants. It’s even worse with southerners, sometimes I can’t even understand whole sentences.” As Reyna works in in a software development firm in the downtown area he often attends —and on occasion leads— meeting with prospective clients; he goes on to say,  “a couple of clients for a project I worked on four months ago came from the south [of Chile] , and whole meetings went by without me understanding a single sentence they said; I was lucky the senior developers at the meetings had my back and answered for me on the spot or offered me a translation later.” Regarding the impact of moving to another country, “it’s something of a positive reverse culture shock: since I’ve moved here I’ve come to appreciate Mexican food and drink more. I really like spice now, beans are great, tequila tastes real good too,” he said. Chileans are a friendly and eager group; in recent years, immigration to their capital has risen and with it foreigners among them. Reyna having settled in the capital meant that he would get the chance to attend meet-ups aimed at foreigners, “so far I’ve met people from the US, France, and Germany at these events. They try to speak in Spanish when among Chileans and fall back on English when stumped; luckily, the locals are helpful and eager to test their English skills.” Another thing that he shared was regarding Chilean cuisine, “food’s bad, drink’s great.  Well, food’s not bad; it’s just painfully uninspired. Also never say to your host “food’s bad”. Chile has a great drink selection: Pisco is good liquor, their wine is fantastic, and their beer scene covers the richness of dark European beers and the bitterness of hipster ales.” Making Santiago his home meant having to settle for lower wages and more expensive everything else —apartments, groceries, tickets to the movies, and so on. It also meant giving up his car —something that for anyone dealing with the endlessness of Texas sounds horrendous— and learning to deal with the subway and bus system. It also meant all his family would be far way and that he would need to learn to discover events and restaurants without the aid of Yelp or Google. However when asked if he would do it again, he answered a resounding “yes”, without thinking about it; he added, “I think about it every month or so, but I see no reason to go back [to the US] yet.”
Share
Share List