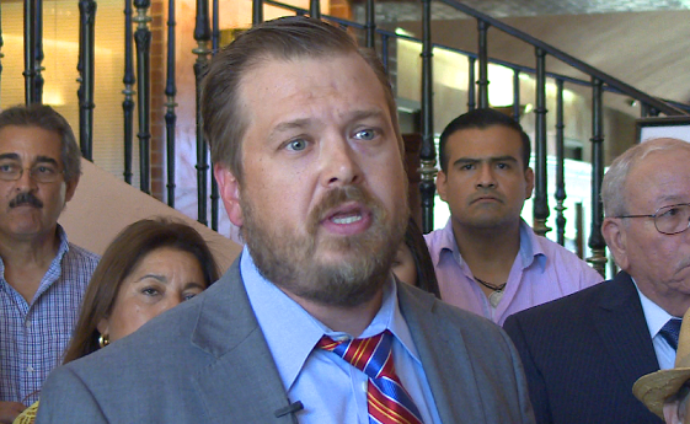 By Robert Soto Elections are right around the corner, not only nationally, but also locally.  On August 24, the City of Laredo held a meeting with a name-placement drawing that determined the order of the names of the candidates in the ballots.  That day, the City of Laredo also announced that several candidates had been disqualified from the city council election.  The meeting was interrupted by a demonstration of dissatisfaction from several candidates who had been disqualified.  Current Councilman from District Seven, George Altgelt, was the most vocal in voicing his disappointment concerning the decision.  The Councilman took office in mid-2015 through a special election, making this his first, full-term race.  However, his campaign was cut short when he was notified that his application had not been turned in properly, leading to his disqualification for the next election. During the meeting Altgelt mentioned several times that his name should have been in the ballot because he had submitted his application on time.  “My application was timely submitted, and you had five days to answer to defect, and the time came and went without any of you notifying me,” Council member Altgelt stated to City Secretary Herberto Ramirez.  Altgelt, alongside two other applicants running for their district, was disqualified by the city because, according to city officials, their applications were not properly filled out.  Algelt stated that he had filed his application on July 26th, 26 days before the deadline.  The reason he filed his application almost a month early was “so [that] if there was a problem, there would be plenty of time to identify it,” Altgelt explained.   By law, the application had to be reviewed no later than five days after it has been filed, and the applicant/candidate must be informed of any irregularities in the application.  Altgelt states that on the date of the deadline, he ran into two individuals who were going to run against him.  “One of those individuals ends up stating, ‘I got a heads up,’ and I didn’t know what it was, and they didn’t tell me,” Altgelt stated. Algelt says he will take every possible measure to be back on the ballot, whether by running as a write in candidate, or by taking legal action against the City of Laredo. When asked to comment about the problem, city officials stated that the three city council candidates had been disqualified for several reasons, specifically for leaving something blank in their applications.  Mr. Altgelt failed to list how many years he had been living in his current residence, which is located in District Seven.  The other two candidates either failed to write in their occupation or their name.   The ordeal ended less than a week later when the city and Altgelt came to an agreement.  Altgelt eventually pursued the legal course of action,  filing a lawsuit against the Laredo Secretary Office.  The lawsuit lasted for only one day, because the City of Laredo agreed to have Altgelt’s name reinstated on the ballot.  The City Manager, Jesus Olivares, stated that “errors were made by staff that didn’t have the knowledge of the requirements … to review that application.”  A San Antonio-based judge ordered the city to not print any ballots until the lawsuit came to a conclusion. Mr. Olivares, after coming into terms with Altgelt, stated that the city will now move forward with the printing of the ballots. This situation ended costing the city almost $20,000, $15,000 of which went to pay George Altgelt’s legal fees.
Share
Share List