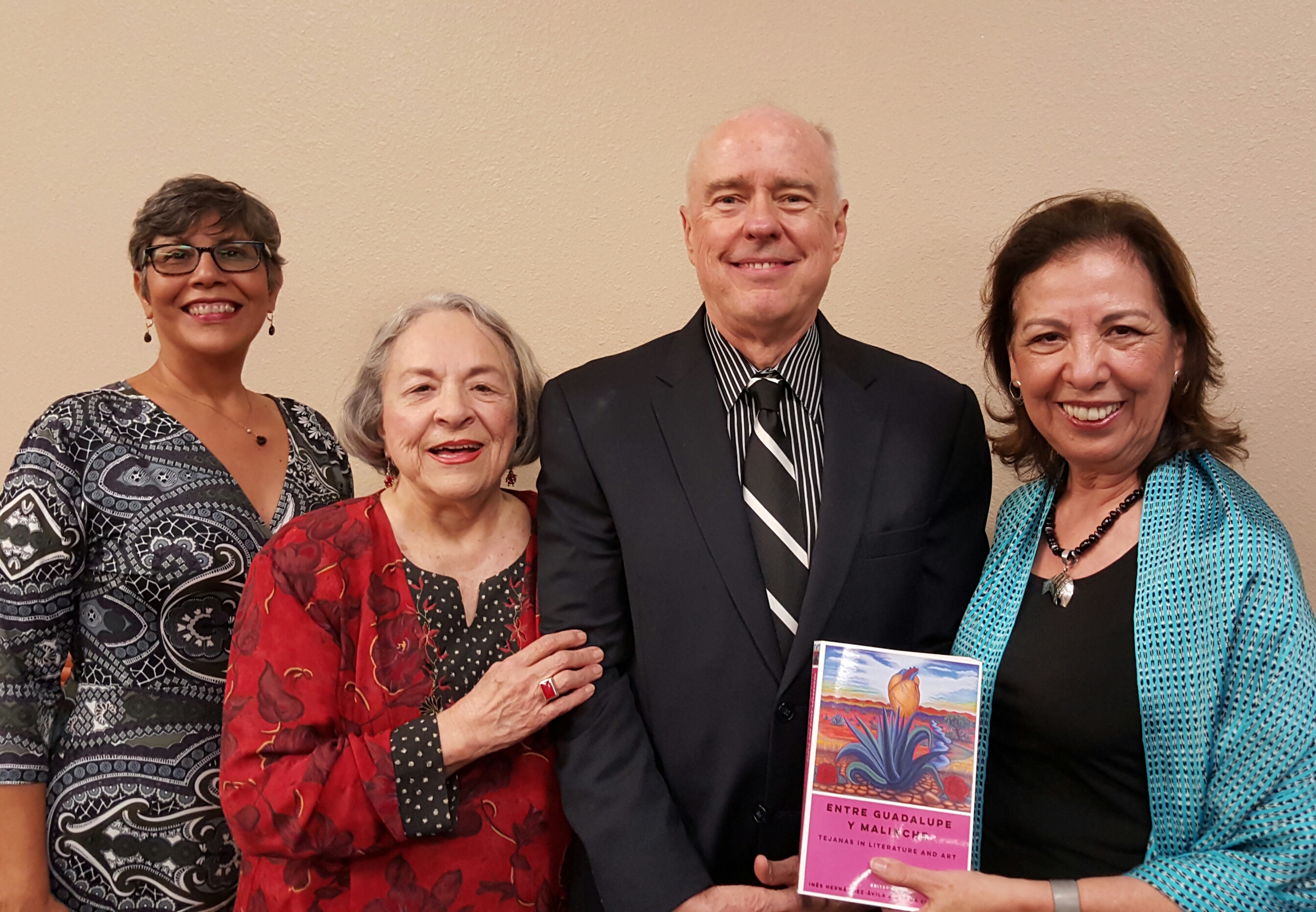 As a “new” student to TAMIU, I am constantly impressed by the amount and quality of guest speakers we have access to at our university. Working with The Bridge has pushed me to attend lectures and events that I might not have considered otherwise. On Tuesday March 29, 2016, I was able to attend a reading and book signing by Chicana authors held in the Zaffirini Success Center. Several women authors who contributed to the book “Entre Guadalupe y Malinche – Tejanas in Literature and Art” were present to read some of their selections. The writers present included Mary Sue Galindo, Raquel Senties, Rose Trevino, and of course Dr. Norma Cantu, editor of the collection. Dr. Norma Elia Cantu should be a familiar name to Laredoans who enjoy literature, as she has published several novels including “Canicula” which is a must-read for Hispanic women. The topics and stories Cantu tells echo many of my own life experiences and I’m sure the same goes for many other young women in our community. Her writing style and her tales of everyday life is why the book won the Premio Aztlan in 1995. Entre Guadalupe y Malinche is a collection of works that span over 25 years according to Cantu, and she added that it was a struggle to get submissions as some works got published through other sources, and some authors passed on without finalizing their approval. I could sense the compilation was a labor of love for Cantu, and she seemed satisfied with the quality of work that they were able to include in the final version. She provided photos of the actual Laredo streets which share their name with the books title, and reminisced about how she remembers that street corner from 20 years ago. Cantu mentioned that Ines Hernandez Avila originally had the idea for the title, and it finally became reality. The room was full, and more chairs needed to be brought in for this special event, and people from TAMIU as well as the Laredo community were in attendance. It was both surprising and exciting that so many people had gathered for the occasion, which made me smile both inside and out. Being an avid reader of Chicana and feminist literature, and seeing many men in the room applauding Cantu and the other authors, was a breath of fresh air. The best part of the evening was the readings by the authors. Cantu jokingly remarked how the amount of “abuelita” poems needed to be trimmed down from the final draft, and Mary Sue Galindo began her reading with of course, an “abuelita” poem. I enjoyed listening to the authors recite the lines because the message comes across in a much more powerful way. Galindo finished with a poem about rape and the shame that comes with it, and she spoke with tears as she ended. The connections that we as an audience are able to feel through a live reading are something that is unique to only those present. Having the opportunity to have witnessed these strong, powerful, women of an older generation is inspiring. My minor is English, and the event was a useful tool to enhance my love for literature. Knowing that several of the contributors to the book are also a part of our community, or are influenced by border culture, were what made the night more personal as well. If you see flyers or receive emails about events on campus that seem interesting to you, I recommend you take advantage of them as the speakers and presenters always have valuable knowledge to share with those who are willing to listen.
Share
Share List