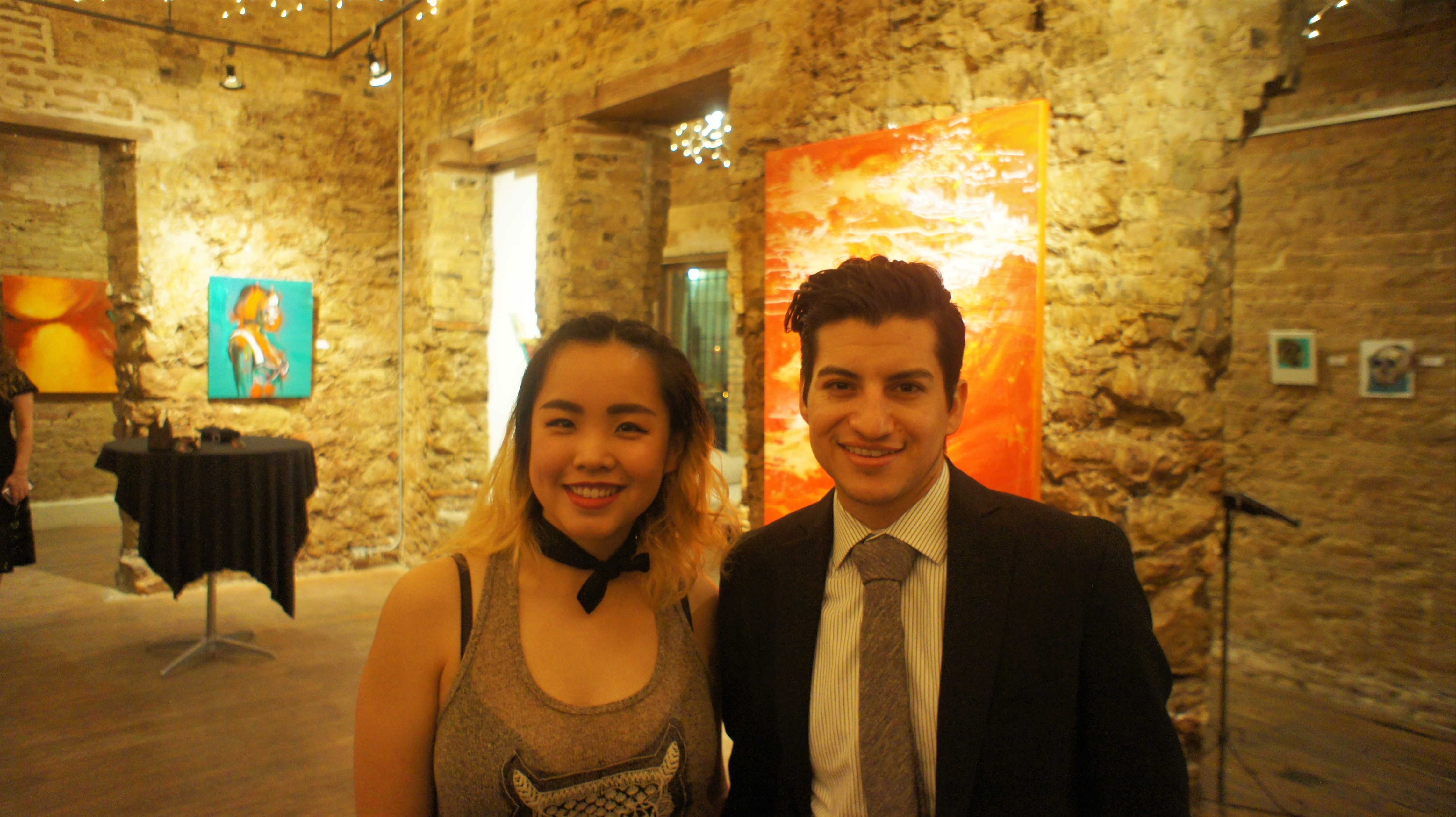 This article originally appeared in the February 2016 print edition.  Story and photos by Dominique Flores “Eye of the Beholder” is the latest exhibit at Gallery 201 located in downtown Laredo. Christina Xu and Edgar Saldaña are the artists featured, and their work fills the space with abstract and expressionist flare: canvases of all sizes hang among the beige rock interior. Visitors are immediately greeted with a guest list to sign and option to include an e-mail address for future event notifications. Further down the entrance is a table of complimentary wine and hors d’oeurves. Xu has provided both photo and canvas prints of her paintings, while Edgar printed copies of a miniature autobiography. Gallery 201 gives an ambiance of social swank and art education instantly. Christina Xu is a 27-year-old emerging artist that moved to Laredo from San Francisco. Eye of the Beholder is Xu’s first major event exposure, although her paintings are far from beginner. Her work explores the human form with expressionistic strokes of acrylic. The juxtaposition of human faces and body frames that are blended with vibrant reds, yellows, oranges and deep greens, browns, and blues on Xu’s canvases are luring. It’s evident that she is both creative with color and talented with sketching –her work is masterful –but is her work more transparent than it appears to be? Who are the mysterious female and male silhouettes? An interview with the artist and a close look at her art personified each piece in a most familiar way. Xu describes her paintings as a personal and sensual series of her past, present, and future reflections as well as desires of herself: the manipulated figures on her canvases are indeed self portraits. Animated and deep colors with level textures are reminiscent of the inspiration Xu has taken from French Impressionist Claude Monet and British Figurative Francis Bacon. Further, Xu’s reveal of herself as the muse to her work demonstrates intimate and vulnerable characteristics acquainted to many young adults of the generation. With beliefs in accordance to most Western societies, Xu’s parents prefer their daughter to follow her collegiate background with medical science, which they believe is a stable and certain career. Xu, exposed to art history and creativity in high school and college decided to focus her passion sincerely. Titles of her work –Behave in the way Specified, Absence of Difficulty or Error, Leaving Home—visualize Xu’s confrontation with herself in relation to societal judgment and expectation through the movement of the human bodies on her paintings. Her disguise is exposed raw and attention to current standards of education and position is the resulted contemplation in the observer. Is Western society abandoning the merit of artistry and causing its creators to mask their fervor for expression over medical advancement? Has society really stuck to associating respectability with salary? Are citizens holding art to be as respectable as a cardiovascular surgeon or scientist these days? Paint is very much a craft as is surgery and theory. Xu is an active, personable artist that is surfacing. Her work, however intentional, shows she is catering to societal norms as much as she is coming to identify and accept herself as unorthodox. But is she unorthodox or equally relevant in society? Edgar Saldaña, another featured artist in Eye of the Beholder, is a student at Texas A&M International University and is “a man of many hats.” He is looking dapper in his full suit and Calvin Klein dress-shoes, eager to experience his first big art show. Saldaña’s Hispanic family has continuously supported his artistic aptitude. His mother even encouraged participation in art contests. Saldaña’s confidence could be representative of maintained praise in his family. He enthusiastically shared his ambitions and past experiences with academics, athletics, charity, and business. He, too, has an interest in science and incorporates his knowledge of astronomy into a lot of his paintings. Saldaña is an organized painter, as his affiliation with various local activities naturally assume him to be. His paintings are abstract interpretations of the feelings evoked from warm, colorful constellations and thought. Saldaña, although skillful in various mediums, prefers acrylic. The paint’s texture allows for manipulation, layering, and quick drying. A unique feature learned from Saldaña’s artistry is his employment of glue and eggshells to add special texture to his canvases. The most imaginative piece of his work, King Cepheus, is a homage to astrology and Greek Mythology. Cepheus, named after the Greek God King Aethiopia, is a constellation in the Northern Sky. Incidentally, the large orange and red supergiants that comprise Cepheus are 10,00 times more massive than the central black hole of the Milky Way, making the constellation the largest known black hole. Saldaña ingeniously portrays emotion as cosmic fantasy and energy. Both Xu and Saldaña are innovative painters that are in the midst of attaining popular praise for their exceptional work. When asked about hopes of meeting buyers, both agreed the compliment would be appreciated, but were happy enough to gain access to such grand exposure given by Gallery 201 and its visitors. Modesty aside, both artists were generous with their background and inspiration to all who inquired. The city of Laredo will be honored as an art educator and supporter of all local expression and talent.
Share
Share List