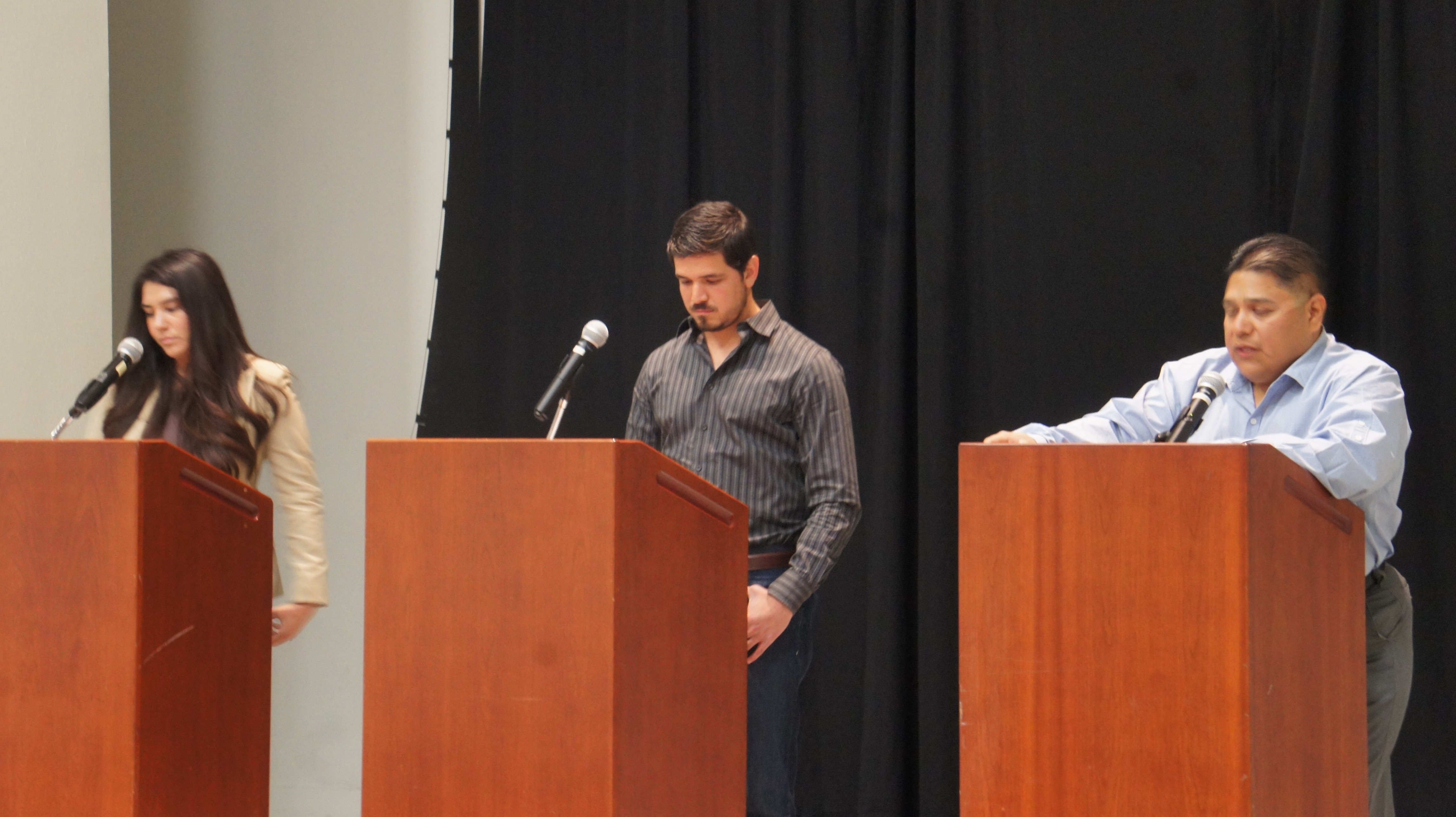 This article originally appeared in the February 2016 print edition. Story and photos by I.M. Kero A special election is being held for a new member to represent District 2 on the city council. Three candidates were invited on February 9 to square off in the prime-time debate that was hosted by the Student Government Association. Esteban Rangel, the current member, has recently vacated his council seat as he pursues to run for Webb County Commissioner. District 2 is located southbound of Loop 20 and accumulated the SH 359 area. The Student Government Association   hosted the event and moderated the questions. The question asked were professional in nature and mirrored those given on the televised presidential debates. Questions submitted by the audience were also asked. Five candidates are currently running for the vacant seat, but of those five, only three were present at the debate. The three candidates that appeared were Ricardo Jaime, Annette Ugalde-Bonugli, and Juan M. Medellin. Ricardo Jamie is currently a TAMIU graduate student. He received his bachelors from TAMIU as well. Jamie was the youngest of the three. He presented his platform with the vigor of a young man and the discipline of a scholar. Jaime has lived in District 2 for twenty years. He highlighted some of the key issues that he saw in his area. Most notably were the burglaries in his district. He proposed that the streets in the area be posted with more street lights. Instead of keeping these areas dark causing more burglaries to occur, his proposal suggested that the lights increased visibility would decrease such crimes. Concerning economics, Jaime viewed that trade and commerce were key to increasing the district’s and Laredo’s overall economy. He stated that the city should invest in more trade and trade routes, for it was most significant in Laredo. Alongside that, he viewed that Laredo and the district needed to increase its tourism for the sake of new tax revenues. Some of Jamie’s immediate actions as council member would be to clean up the streets and parks in his district. He addressed the notion of not having to build new parks while many were still in need of maintenance Juan M. Medellin was the oldest of the three. Coming from the healthcare industry, Medellin has been in emergency medical services for nineteen years, and his the current director of operations for MedPoint Ambulance. Medellin’s age and experience was very prominent is his speech. When asked about economic development, he stated policies in supporting local businesses and home development. Medellin highlighted several of the traffic issues in his district. He spoke of proposals to advance the flow of traffic after delays were caused. He also addressed how some of District 2’s neighborhoods were also blocked by traffic which have hindered the flow of traffic and the safety of the residents. Such neighborhoods include Ponderosa, Concord Hills, Las Missiones , and others in the 359 corridor. Medellin was also very adamant on infrastructure. He stated that funding support for better and new infrastructure were to be some of his opening efforts as council member. Medellin also noted some fiscal responsibilities. He noted to utilize the many un-used police cruiser to their full advantage before purchasing a fleet of new ones. Like Jaime, he agreed with putting efforts to sustain the parks rather than making new ones. Annette Ugalde-Bonugli was the third and female candidate. Ugalde-Bonugli comes from a business background. She took every liberty to repeatedly state her business background, her family values, and her femininity. Ugalde-Bonugli presented common conservative values stating that she was pro-business and the city was not business friendly. When asked questions, her responses were political in tone and continually highlighted her three key features. Ugalde-Bonugli was also the only candidate of the three to receive campaign contributions. Though not the highest receiving, the other two candidates expressed proudly of their campaign independence. When asked about her contributions Ugalde-Bonugli was quick to her defense citing constitutional rights and her record books. Aside from avoided the questions asked about her policy, Ugalde-Bonugli quoted Plato and mediocrely quoted John F. Kennedy. The real highlight of the debate was the Student Government Association. Present at the event was student-body president Joshua Llamas. Llamas stated that events like these were created to mobilize local voters. The SGA selected this election as a good opportunity to get TAMIU students involved in local politics. Like all of Laredo’s local political forums, the turnout was far from exceptional. Even SGA members were sparse in number. However, President Llamas did state that events like these would continue, and SGA member will be more prominent. SGA did not have any comment towards which candidate they favored, but were glad to have hosted the event. The District 2 special election will be held on February 13.
Share
Share List